Inuit on the edge 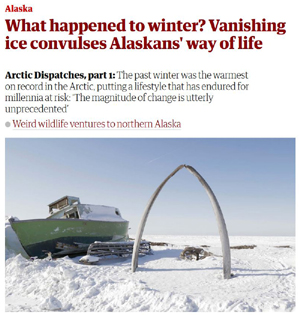 The Guardian has an on-the-scene take on this past winter in northern Alaska: What happened to winter? Vanishing ice convulses Alaskans’ way of life.

The story focuses on the Inuit, who are watching their ecosystem literally crumble around them. I can’t say I’m unhappy about a threat to someone’s ability to kill whales, but the impending end to a people’s millennias-old way of life because of climate change is something we can all sympathize with.

The silver lining? Climate change denial only goes so far in the face reality. “For a reliably Republican state, polling shows unusual numbers of Alaskans are concerned about climate change…”