The danger ahead and the Green New Deal 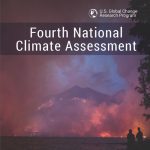 The Fourth National Climate Assessment is the latest in a drumbeat of bad news about climate change. The numbers are clear, climate change is going to cause increasing amounts of suffering.

There’s also been good news about our response to climate change. More on that in a bit – first, here’s a quick overview of the report’s main points:

1. Communities
Climate change creates new risks and exacerbates existing vulnerabilities in communities across the United States, presenting growing challenges to human health and safety, quality of life, and the rate of economic growth.

2. Economy
Without substantial and sustained global mitigation and regional adaptation efforts, climate change is expected to cause growing losses to American infrastructure and property and impede the rate of economic growth over this century.

3. Interconnected Impacts
Climate change affects the natural, built, and social systems we rely on individually and through their connections to one another. These interconnected systems are increasingly vulnerable to cascading impacts that are often difficult to predict, threatening essential services within and beyond the Nation’s borders.

4. Actions to Reduce Risks
Communities, governments, and businesses are working to reduce risks from and costs
associated with climate change by taking action to lower greenhouse gas emissions and implement adaptation strategies. While mitigation and adaptation efforts have expanded substantially in the last four years, they do not yet approach the scale considered necessary to avoid substantial damages to the economy, environment, and human health over the coming decades.

5. Water
The quality and quantity of water available for use by people and ecosystems across the country are being affected by climate change, increasing risks and costs to agriculture, energy production, industry, recreation, and the environment.

6. Health
Impacts from climate change on extreme weather and climate-related events, air quality, and the transmission of disease through insects and pests, food, and water increasingly threaten the health and well-being of the American people, particularly populations that are already vulnerable.

8. Ecosystems and Ecosystem Services
Ecosystems and the benefits they provide to society are being altered by climate change, and these impacts are projected to continue. Without substantial and sustained reductions in global greenhouse gas emissions, transformative impacts on some ecosystems will occur; some coral reef and sea ice ecosystems are already experiencing such transformational changes.

10. Infrastructure
Our Nation’s aging and deteriorating infrastructure is further stressed by increases in heavy
precipitation events, coastal flooding, heat, wildfires, and other extreme events, as well as changes to average precipitation and temperature. Without adaptation, climate change will continue to degrade infrastructure performance over the rest of the century, with the potential for cascading impacts that threaten our economy, national security, essential services, and health and well-being.

11. Oceans & Coasts
Coastal communities and the ecosystems that support them are increasingly threatened by the impacts of climate change. Without significant reductions in global greenhouse gas emissions and regional adaptation measures, many coastal regions will be transformed by the latter part of this century, with impacts affecting other regions and sectors. Even in a future with lower greenhouse gas emissions, many communities are expected to suffer financial impacts as chronic high-tide flooding leads to higher costs and lower property values.

12. Tourism and Recreation
Outdoor recreation, tourist economies, and quality of life are reliant on benefits provided by our natural environment that will be degraded by the impacts of climate change in many ways.

Here’s Vox’s list of 10 ways to accelerate progress against climate change, posted in response to the report:

How we as a society take these steps is a matter of political action and organization. A plan to do that, the Green New Deal, is gaining traction in the wake of the 2018 midterm elections.

Here’s Naomi Klein’s take on The Game-Changing Promise of a Green New Deal.

And here are some highlights:

…the pathway is clear. It begins with the galloping momentum calling on the Democratic Party to use its majority in the House to create the Select Committee for a Green New Deal, a plan advanced by Ocasio-Cortez and now backed by more than 14 representatives.

The draft text calls for the committee, which would be fully funded and empowered to draft legislation, to spend the next year consulting with a range of experts — from scientists to local lawmakers to labor unions to business leaders — to map out a “detailed national, industrial, economic mobilization plan” capable of making the U.S. economy “carbon neutral” while promoting “economic and environmental justice and equality.” By January 2020, the plan would be released, and two months later would come draft legislation designed to turn it into a reality.

That early 2020 deadline is important — it means that the contours of the Green New Deal would be complete by the next U.S. election cycle, and any politician wanting to be taken seriously as a progressive champion would need to adopt it as the centerpiece of their platform. If that happened, and the party running on a sweeping Green New Deal retook the White House and the Senate in November 2020, then there would actually be time left on the climate clock to meet the harsh targets laid out in the recent IPCC report, which told us that we have a mere 12 years to cut fossil fuel emissions by a head-spinning 45 percent.

Pulling that off, the report’s summary states in its first sentence, is not possible with singular policies like carbon taxes. Rather, what is needed is “rapid, far-reaching and unprecedented changes in all aspects of society.” By giving the committee a mandate that connects the dots between energy, transportation, housing and construction, as well as health care, living wages, a jobs guarantee, and the urgent imperative to battle racial and gender injustice, the Green New Deal plan would be mapping precisely that kind of far-reaching change. This is not a piecemeal approach that trains a water gun on a blazing fire, but a comprehensive and holistic plan to actually put the fire out.

The ground for this moment has been prepared for decades, with models for community-owned and community-controlled renewable energy; with justice-based transitions that make sure no worker is left behind; with a deepening analysis of the intersections between systemic racism, armed conflict, and climate disruption; with improved green tech and breakthroughs in clean public transit; with the thriving fossil fuel divestment movement; with model legislation driven by the climate justice movement that shows how carbon taxes can fight racial and gender exclusion; and much more.

What has been missing is only the top-level political power to roll out the best of these models all at once, with the focus and velocity that both science and justice demand. That is the great promise of a comprehensive Green New Deal in the largest economy on earth. And as the Sunrise Movement turns up the heat on legislators who have yet to sign onto the plan, it deserves all of our support.